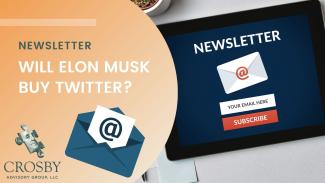 Elon Musk recently put his money where his mouth is, digitally speaking, when he made an offer to buy Twitter for an astounding $43 Billion. To provide a brief history of his investment, Musk began buying Twitter shares on January 31st, 2022 using a not-held order. What is a not-hold order? It's an order basically telling a broker to buy shares over an extended period of time, sometimes 30 days or more, at the best price determined by the broker. This is why Musk was able to obtain 9% of the company without anybody noticing. When he disclosed his position with the SEC, the price of the Twitter stock rose from $39.31 a share to $50 dollars a share in one day, likely making Elon Musk a couple hundred million dollars richer in the process.

After the disclosure on April 4th, the CEO of Twitter publicly invited Elon Musk to join the board. The stipulations of joining the board were that Elon would cap his ownership at 14.9% of the company. Elon rejected the offer almost immediately and Twitter did not announce his rejection until days later. As a member of the board of Twitter, Elon would be legally obligated to act in the best interest of Twitter shareholders. If he were to take his board seat and could not enact changes, he could face legal ramifications if he liquidated his stake in the company. With his limited 14.9% stake, he also wouldn't be able to enact the sweeping changes he sees necessary for Twitter.

This offer was met with hostility from the Twitter board of executives. The board called on Goldman Sachs to evaluate the offer. At the time, Goldman had a “sell” rating on Twitter and valued the company at $30 a share. The board collectively owns 12% of Twitter and the vast majority is owned by Vanguard, Blackrock, State Street, and now Elon Musk. In response to Elon’s purchase, Vanguard increased its stake in Twitter to reclaim the top ownership at 10.3% ownership.

In another attempt to diminish Elon’s effort, Twitter’s board enacted a “poison pill” strategy to fend off a hostile takeover. What is a poison pill strategy? It's a defense against a hostile takeover by diluting all shares if one shareholder crosses a threshold of ownership. In this case, if Elon were to acquire 15% of the company all other shareholders would be offered new shares at a discounted price. If other shareholders chose to purchase these new shares, Elon’s stake would be diluted, and ownership would be more concentrated among existing shareholders.

At the time of writing, the most recent development is that Elon has secured $46 Billion to fund the full 100% ownership of Twitter. The funding is a mix of cash, debt, and a $12.5 Billion collateralized loan backed by his Tesla shares. This puts Twitter executives in a tough spot. Twitter executives have a legal obligation to act in the best interest of Twitter shareholders. Goldman Sachs, the company Twitter hired to evaluate the deal, claims Twitter is worth $30 a share by their own research. A poison pill would knowingly decrease the stock price. Elon is offering an 80% premium on Goldman’s fair value for Twitter and if his offer is rejected, he would likely sell his position causing the stock to crash. Twitter faces potential legal ramifications if they reject the offer without allowing stockholders to vote and there is a legitimate case to be made that accepting the offer is in the shareholder's best interest. Rejecting the offer would certainly have negative implications for the stock.

Tune in next week to the Dynamic Growth podcast as we discuss why the offer is so interesting and what it means for free speech. I am not sure if Elon will be successful with his bid, but anybody that was originally questioning his offer has been proven wrong now that he has secured funding for the deal.