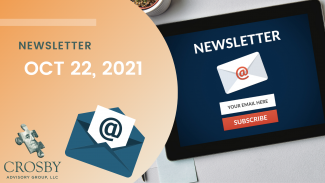 First U.S. Bitcoin ETF Debuts
Investors who want exposure to Bitcoin just got more options.  On Tuesday, ProShares Bitcoin Strategy (BITO) debuted and is currently trading around $40 per share at the time of this newsletter. ProShares Bitcoin ETF tracks the futures price of Bitcoin.
Pros
While Bitcoin is just over a decade old, in its short history, it has proven to be an effective hedge against the U.S. dollar which is no longer backed by gold or limited supply.
Bitcoin’s fixed supply of 21 million coins may allow mechanisms of supply/demand to push prices higher over time if it continues to gain support.
Cryptocurrencies like Bitcoin can offer another asset class to further diversify a portfolio.
Cons
Bitcoin as an asset and store of value is still relatively new.  We believe at this point Bitcoin’s popularity and application will grow; however, we expect the price to remain volatile.  Investors should expect price fluctuations of more than 50%. We expect world governments to attempt to increase the regulation of cryptos as an asset class.
The ProShares Bitcoin ETF is not the same as owning actual Bitcoin which can be stored on a trading platform or offline on a hard wallet.
The expense ratio of BITO is 0.95%.  This is on the higher side of what we like to see in an EFT.  We expect more Bitcoin ETFs to debut in the coming months.  Increased competition should reduce expense costs.
In December of 2020, we did a podcast on Bitcoin.  If you are unfamiliar with what it is and how it derives its value you can listen to it here.   The most common question we get on Bitcoin is “where does it derive its value?”  With a fixed supply of 21 million coins, Bitcoin’s value increases and decreases with demand.  Think baseball cards. A 1914 Babe Ruth Baltimore News baseball card is presently valued at around $6 million.  Why?  It is rare, there are fewer than 10 known copies.  Scarcity creates value. Fiat currencies like the US dollar that have been removed from the gold standard and can be created from thin air fall prey to inflation. Their purchasing power erodes over time as the money supply increases. Historically assets like gold and precious metals have served as a hedge and a store of value that protects wealth from inflation. We believe the likely role of Bitcoin is as an alternative store of value to compete with gold and silver. El Salvador was the first country to declare Bitcoin as legal tender.  There are some who believe cryptocurrencies like Bitcoin may help the economies of developing nations whose fiat currencies are so devalued that they are at a disadvantage for international trade purposes.  The complete story is far from written on Bitcoin, but we see it as another asset class for further diversification.
Disclaimer: Bitcoin is a highly volatile asset and is not suitable for all investors. Owning bitcoin futures is not the same as owning actual Bitcoin.  This article is for informational purposes and not a specific investment recommendation without consultation.

Weekly Wisdom
“A wealth of information creates a poverty of attention”. -Ryan Holiday.

I am convinced one of the skills needed to thrive in the present is the ability to filter out the noise.  Most of the information that comes to us from our phones and devices is white noise that offers nothing which can be built upon to create a better life.  Curly, the trail boss from the cinematic masterpiece “City Slickers”, once said, “The secret to life is one thing.”  Find out what that “one thing” is, and the rest doesn’t mean a thing.  Being a weathered trail boss, Curly used slightly more colorful language but his point was clear.  Focus on what is important and let the rest go.

If a Tree Falls in Your Yard….
and no one is around, does it make a sound? No, the collision with the ground will create vibrations, but it is our ears and brain that turn those vibrations into sound.
A more important question, is there insurance coverage?  Should you pick up a $10 bill lying on a restroom floor?  The answer to both of those questions is, it depends.  When a tree falls and lands on a covered structure such as the home, garage, pool, or fence, a homeowner’s policy will provide coverage for both the removal of the tree and damage to the covered structure. If the tree lands in the yard and does not hit a covered structure the insurance policy will typically consider such an event a maintenance issue and will not provide coverage since none of the covered structures sustained damage. As far as the $10 bill, I’d probably pick it up, but that scenario should be taken case by case.

Tesla Hits a New All-Time High
At the beginning of the year, Derek predicted that Tesla would underperform the S&P 500 due to the amazing run that Tesla went on in 2020 driven by increased sales, short squeezes, and a sort of clearing of the storm for the company. At the beginning of the year, his prediction was his hottest take because the stock was on fire surging 695% in 2020. It eventually drew down 21% from February to May 2021. Since then, it has been trekking back up to its previous highs.  His prediction may turn out to be incorrect after all.
Tesla has a shaky history, to say the least. They went public in the depths of the great recession and CEO Elon Musk has bet it all on the company a commendable number of times in their history. It seems for now they are on much sturdier ground with consistent growth in revenue and finally turning a profit for a full year in 2020. Leading up to their earnings report the stock had been making significant gains driven by rumors of a great quarter and they did not disappoint.
Tesla ($TSLA) beat earnings estimates by 15.22% achieving EPS of $1.86 per share (1.59 expected) and beating revenue estimates by .4% earning 13.76B while 13.63B was expected. Tesla generated 806M in revenue from its energy business, 894M in “services and other revenue” which includes repairs, insurance, tesla branded merchandise, etc. They also recorded a 51-million-dollar impairment charge due to the depreciation of bitcoin on their balance sheet. They still own over 1 billion dollars of Bitcoin and currently hold the asset on their balance sheet. They did not buy or sell any bitcoin this quarter.
If you are interested in being a shareholder in Tesla there are a few things to consider. The positives are the electric vehicle space is growing and tesla has obtained a huge first-mover advantage in both branding and from a technological standpoint. Electric cars are almost synonymous with Tesla and there is huge demand from consumers which is reflected in increased sales for Tesla. Their self-driving technology and AI systems are developed in a way that the more Tesla vehicles there are on the road and the more people drive them, the better the self-driving capabilities get. The network of information they are building with each car as a data point will revolutionize how we drive. Driverless taxis, renewable energy, fully autonomous driving, networks of charging stations nationwide are all reasons to own Tesla’s stock.
The negatives are the short-term hurdles they face with the supply chain and semiconductor shortages will absolutely impact how many cars they can get to consumers. Analysts are estimating these problems may not be fixed until mid 2023-2024. This is a major issue across many sectors and Tesla is by no means immune. Another issue with the stock is the incredibly rich valuation. It is currently trading at a whopping 467x Earnings which is crazy in this environment. With inflation as high as it is, investors usually look for bargains as you are already paying more for stocks denominated in a depreciating USD and then on top of that paying a high premium to own an expensive company with a high P/E ratio. Companies with these sky-high valuations are vulnerable because the upward potential is already limited, and investors look to cheaper stocks to own. The only reason to own a company with this high of a P/E ratio is if you expect earnings to drastically increase in the future which many believe is the case with a company like Tesla.
Tesla is currently a small weighting in our Tactical Model. Do your own research to see if it fits your risk and growth objectives or contact us to discuss further.  Tesla analysis provided by Derek Ballinger, Chief Innovations Officer, Crosby Advisory Group, LLC.

Disclaimer: This newsletter is for informational purposes only and should not be considered personal investment or insurance advice for you without consultation. Investing involves risk including the potential loss of principal.  Understand all risks and fees before making an investment.  Employees of Crosby Advisory Group, LLC and Nemec Malinas &Dynes Insurance hold investments mentioned in this newsletter.  Crosby Advisory Group, LLC is a registered investment advisor.  Insurance products are sold and serviced through Nemec Malinas & Dynes Insurance.