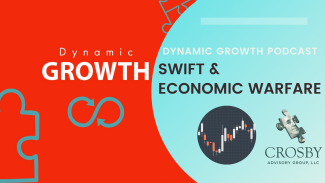 SWIFT (and we don’t mean Taylor)

This week we attempt to prepare our listeners for water coolers, text messages, and/or dinners with friends as we shed some light on the recent announcements coming from the SWIFT. What is it, who’s in it, and what has the world talking about it.

Founded in 1973, it is comprised of a large network of roughly 11,000 banks from all over the world. Think of it as a messaging service for money. SWIFT member banks share information with each other about sending and receiving funds – mostly across international borders.

SWIFT operations are located in Belgium – which makes sense because of it’s fairly neutral location – and is overseen by the G10 countries (psst that includes the US).

This week, SWIFT announced that Russia was being banned from the banking system. This has only happened a few times in history - including Iran, some banks in N Korea, and now we can add Russia to the list.

What exactly does it mean to be banned?  Well, it’s pretty darn painful because they will not be able to receive payments from exports or pay for imports – essentially, they are isolated from the global economy. Imagine sitting on cash that you cannot spend.

In response to SWIFT’s announcements, the Russian Ruble was down 30% to the US Dollar and the Russian stock market index (MEOX) lost 33% of its $189B of value.

So, if you’re hanging with us – yes, SWIFT (and other big-name companies) are weighing in on who can play and can’t play financially and ultimately inspiring headlines that include phrases like: weaponizing the monetary system and economic warfare. We’ve seen PayPal, Mastercard, Visa, Apple pay, Google pay, and stand with SWIFT and ban business transactions in Russia.

Slippery slope? We tend to think so.

The Future for Russia

I think we can all agree that long-term Russia needs to do business internationally. If we take oil alone, Russia is the 3rd largest producer in the world (behind UAE and Saudi Arabia) and it makes up 10.53% of the global oil exports. There are some large European countries that are highly reliant on Russian oil and they may have to find back-end ways to get through the SWIFT restrictions (don’t worry, the US gets our oil from Canada, Saudi Arabia and Mexico).

So, what options does Russia have?

Ideally systems like SWIFT operate in the background and the general population doesn’t know / need to know the day-to-day activities. For us, this is just another reminder of how important it is to have a sound investment strategy. Keep at it and, as always, stay the course.

For anyone that isn’t paranoid enough after all that financial warfare talk, we recommend you add Snowden & Dark Water to your movie list.

In all seriousness, our hearts are with all those that are impacted by the current global environment and we hope things are resolved as peacefully as possible in the very near term.