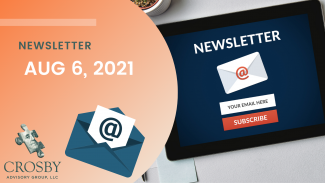 Subscribe to our newsletter for early access to these reports and more insight on investing and ways to save on your insurance.

Our watchlist is composed of publicly traded companies that are of interest to us.  Our Tactical Model stocks are stocks that we actively trade in our Tactical Model, which is our most aggressive investment model.

Listen to this week's podcast where we mention Stocks to Watch in August. As part of our newsletter, we want to give periodic updates about the stocks in our Crosby Advisory Tactical Model and/or watchlist whenever it comes up. This week was busy for earnings and we wanted to note our thoughts and provide the highlights of these earnings calls. You can find our most recent podcast (and it’s a good one!)

Terminology:
EPS: Earnings-Per-Share is profit divided by the number of shares. In essence, it tells you how much profit the shareholder gets per share they own. This number is used to calculate valuation metrics like P/E ratio

Adjusted EPS: EPS adjusted for short-term variable changes in revenue or costs circumstances or omitting revenue from sources not from the main business.

Market Cap: Total dollar market value of a company's outstanding shares of stock. It measures what a company is “worth”

Watchlist Stocks:
General Motors (GM) General Motors reported earnings on August 4th beating both EPS estimates and Revenue estimates. The stock sold off shortly after because of failure to meet expectations for Adjusted EPS caused by $1.3 billion warranty recall costs, including the $800 million General Motors spent on o the Chevrolet Bolt EV. The electric car has so far been recalled twice over the past year due to fire risks, with the most recent happening last month. Even with this negative news, GM raised full-year guidance and doesn't expect any delays with electric vehicle production because of the chip shortage. GM is a cheap stock to own by many valuation metrics. It is currently trading at a P/E ratio of 8.5 and a PEG ratio of less than one. PEG ratio below one is a metric used by value investors to determine if a stock is a good value. Competitor Ford says their production will in fact be hurt by the chip shortage and we don't see how GM can make it through unscathed, but the stock is trading at a good value.

Cummings (CMI) reported earnings on August 3rd beating wall street expectations. They beat EPS estimates by 2.95% and revenue estimates by 1.89%. Cummings designs manufacturers and distributes diesel and natural gas engines. Cummings would be considered a Cyclical stock meaning the company benefits from an economic recovery and would be hurt during an economic downturn. As the economy opens back up, and a large infrastructure bill on the horizon, you could expect Cummings to benefit and grow. They are projected to grow EPS 15.98% in the next year and they pay a high & sustainable dividend at 2.34%. The long-term issue for Cummings is the heavy focus on diesel and natural gas engines. They do have a portion of their business in electric and hybrid powertrains, but they are making a much larger long-term bet on diesel and natural gas. Cummings has an advantage in its size. It's a massive company but if their investments don’t play out their way, they could be vulnerable to an electric company like Tesla.

Canopy Growth Corporation (CGC) Canopy Growth is not a major holding in any of our accounts or in the Tactical Model. It is on our watchlist because we believe it represents a solid chance to grow in the Cannabis industry. We would recommend ONLY if you want exposure to cannabis. They have received a giant cash infusion from Constellation Brands (STZ) worth billions of dollars. Constellation Brands now owns 38% of Canopy Growth. We would expect the amount of cash needed to roll out an entirely new industry across Canada and eventually the U.S. would take massive resources and Canopy is the only company that has the resources to lead us to believe they could be successful. With that said they haven't been a great company to own, they are flushed with cash but spend exorbitant amounts of money on endorsement deals and 3.2 million dollar executive raises while billions in annual losses continue. To be successful long-term and grow they are reliant on U.S. cannabis legislation.

Starbucks (SBUX) reported earnings beating wall street expectations for EPS (Earnings-per-share) and Revenue. Starbucks beat Wall Street analyst's expectations for EPS by 29.49% and beat Revenue expectations by 3.01%. The growth was driven by a surge in demand for their cold beverages. Starbucks stock is trading lower today, the stock is down 2.6% at the time of writing due to the pessimistic outlook globally due to slower reopening in Europe and slowing growth in China. Starbucks also said they have locked in the price of coffee beans for the next 14 months to protect itself from rising costs. They could still see rising costs due to labor or other inputs. Our long-term view of Starbucks ' growth remains positive.

Visa (V) reported earnings beating wall street expectations. They beat EPS estimates by 10.50% and revenue estimates by 4.65%. Visa saw growth in their face-to-face transactions due to reopening but the CFO says there is still room for growth. Visa still sees e-commerce spending is strong even though the U.S. is reopening. Tactical model holdings Mastercard (MA) and Paypal (PYPL) are reporting earnings later in the week to keep an eye out. We expect similar performances from those companies. We are bullish on all of these stocks over the next five years.

Crosby Advisory Tactical Model Stocks:
Square (SQ) reported earnings smashing wall street expectations for EPS by 112% but missed Revenue estimates by 7.85%. Square is becoming a big player in the financial space with a huge acquisition of Australian company Afterpay. Afterpay is a buy-now-pay-later service that has over 16 million users globally. We love the cashless space. We think the future is cashless which is why we have a heavy weighting in fintech in the Tactical Model. We own PayPal, Square, Mastercard and see Square as a long-term holding. Square trades at a high premium, it's currently trading at a P/E of 437, it is difficult to justify that valuation now but if you look at projected growth rates that could be justified over the long term. Square is projected to average a growth rate of over 50% annually over the next 5 years. With the Afterpay acquisition and their aspirations to start a decentralized finance (DeFi) business around bitcoin, we can make the case for a bright future. If the macroeconomic environment shifts and the Federal Reserve looks to raise interest rates, we could see some stocks with sky-high valuations come down to more reasonable levels. If that is the case we would use the opportunity to add to our Square position.

Public Storage (PSA) Earlier in the year, Nate predicted on the podcast that Public Storage would have a good year. On the podcast, we discussed how people utilized storage units while many were selling/buying their houses taking advantage of the red-hot housing market. We also noted that once someone rents a storage unit, its likely they will keep it for a long time. This was reflected in PSA stock so far this year. They reported earnings on August 4th and beat earnings estimates 1.63% and revenue estimates by 3.09%. PSA is up 39.39% YTD and it's up 55.83% for the trailing 52 weeks. Public Storage pays a nice dividend at 2.61%. PSA is considered a REIT (Real Estate Investment Trust) and they are required to pay out at least 90% of their profits as a dividend. This continues to be a great stock to own going forward.

Apple (AAPL) reported earnings beating wall street expectations for both EPS and Revenue. Apple beat EPS estimates by 28.16% and revenue by 11.02% driven by strong demand across all of their devices. iPhone Sales increased almost 50% from the same time last year, MacBook and IPad sales increased 16% and 12% from the same time last year respectively. In 2020 Apple brought in 28.6B from MacBook sales which is greater than the entire annual revenue of Netflix. The stock is trading lower, down 1.4% at the time of writing because of concerns over the global shortage of computer chips needed for their devices. CFO expects solid growth for the same time next year but could see diminished growth in the following three months due to global shortages. CEO Tim Cook also noted that they saw double-digit increases in both people upgrading previous Apple devices as well as consumers switching to iPhones for the first time. Apple remains a top holding in the Tactical Model and we are not concerned about short-term hurdles for the company.

Advanced Micro Devices (AMD) is a new addition to the Tactical Model, adding it earlier in the year. Competitor NVIDIA (NVDA) has been a core component of the Tactical Model since its inception. We looked to add AMD because of their valuation metrics that looked cheap for the sectors they had exposure to. Sectors like Data Center, Cloud Computing, High Powered Supercomputing, Artificial Intelligence, Cryptocurrency Mining, Gaming/ ESports, Autonomous Driving, Personal Computing, and others. Despite being a player in these high growth sectors AMD was trading flat for the past 52 weeks while competitor NVIDIA has vastly outperformed the market this year despite being a much more expensive stock to own. AMD beat EPS estimates by 16.95% and revenue estimates by 6.57% due to its growth in the Data Center business. Analysts are watching AMD take market share from Intel in the space of personal computers. We are still optimistic about AMD, and we believe buying the stock of AMD and NVIDIA is a way to profit from the global computer chip shortage. AMD is trading higher today up 7.14% at the time of writing

Alphabet (GOOGL) is the parent company of Google, Youtube, and many other subsidiaries. An interesting thing to note about Google is that Wall Street tends to favor other huge tech stocks like Apple, Amazon, Netflix, Microsoft more than Google. So in 2020, we saw a huge run-up in other large tech stocks but Google lagged behind. In 2021 there was a big shift, Google is up 43.06% for the year while other mega-cap tech stocks have been growing slower. Google smashed EPS estimates by 42.87% and revenue by 10.35%. A huge win, we are optimistic about google the long term and we think they are going to continue to grow. A potential long-term hurdle is an antitrust legislation that could cause Google to be broken up into smaller companies. Similar threats exist for Apple, Amazon, and Facebook. For the time being, we don't see these as immediate threats and we remain bullish on Google over the next five years.

With uncertainties in the global supply chain and macroeconomic issues like Inflation and Unemployment, it is reassuring when the winners of our tactical model post great quarters with growing profits and revenue. As long as these companies continue to produce, interest rates remain low, and the outlook for covid trends positive, we see reasons to remain bullish for the remainder of 2021.