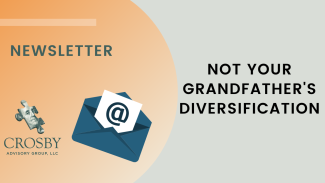 Not your Grandfather's Diversification

Have a wonderful weekend!  Derek outdid himself on the inflation article.  Some of it is high level but he does a nice job of putting it in plain English. Let us know if there is anything we could be doing better to serve you.

“If the mind is disciplined, the heart quickly turns from fear to love.” -John Cage

Since I was in high school, I’ve struggled with speech.  I have learned to pass the commute to work by listening to YouTube videos on speech therapy and public speaking.  During a recent lesson, the instructor declared the most confident person in the room is always the one with the slowest breath. Confidence takes root in the breath.  Think of an actor who plays a king or queen.  What do they do?  They don’t do anything, they sit there and let everyone else walk quickly on eggshells around them.  In life, there are moments where we feel like the stage may be too big: the public speech in front of a large audience or an interview for a dream job.  Your mind will follow your breath.  Control your breath; control your mind.

Diversification Back in Vogue

“How many different types of investments should I own?”  A new client posed that question to me in a recent meeting.  That depends on your goals. The client stated that in the past she had owned a variety of stock funds, but it seemed like they all would decline at the same time and grow at the same time.  I explained to her that even though she may have owned many different stocks, she only owned one asset class: Stocks.

An asset class is a group of investments that act the same.  Stocks tend to move in the same general direction in good times and bad.  By adding more types of asset classes you can diffuse risk and even control volatility.  Implementing multiple asset classes allows Crosby Advisory to control volatility in our risk-based models that we talk about quite often.

What are some other types of asset classes besides stocks?  Fixed income (bonds, money market, debt products) are added to portfolios to provide regular income.  Fixed income historically has displayed less volatility than stocks, thus is routinely used to balance a portfolio.  Real estate is an asset class that is another great option for providing both appreciation potential and income.  Precious metals like gold and silver tend to act as insurance policies against stock loss as they tend to appreciate when stocks rapidly decline.  Commodities, which due to current high levels of inflation are a component in most of our models.  Commodities are things we buy like oil, food, lumber, and other supplies we use on a day-to-day basis. Alternative investments like Bitcoin, art, or collectibles offer further diversification of investments that are not directly related to stocks.

For the first time in a long time, the U.S. economy faces some unique headwinds.  Inflation continues to grow rapidly yet we question the ability of the Federal Reserve to raise interest rates in a meaningful way without causing the U.S. debt to be unserviceable.  If you haven’t heard, we have a bit of a government spending problem. We believe owning a variety of types of investments (many asset classes) will be back in favor in the years to come. We have been talking on our podcast about the theme of scarcity.  Investments that are scarce or have a fixed supply tend to be doing very well.  Look at the huge growth of Nvidia which makes graphics processing units, CPUs, and supercomputers, all of which have components in short supply, or even real estate and commodities.  All have helped investors grow their portfolios.  We believe this theme remains for the foreseeable future.

The narrative throughout the year has been there will be an increase in prices but this will be a temporary spike due to the massive effort of restarting the economy from a dead stop in 2020. We have been talking about this ad nauseum, we apologize but at the same time don't expect us to stop any time soon because we believe this will be a persistent problem through 2022 and potentially the foreseeable future.

The classic dichotomy in modern macroeconomics is between unemployment and inflation. It is the mainstream belief that when the economy is growing there will be low unemployment and this puts upward pressure on wages, with more people competing for a smaller pool of jobs. This upward pressure on wages causes prices to rise, rising costs of labor equate to higher prices. The same works in reverse, when the economy is in recession people are spending less which causes unemployment to rise and puts downward pressure on wages making prices fall. In our current economic system, this balance is deliberately managed by the Federal Reserve. The FED can use many tools to combat both inflation and unemployment. The tools that get the most attention are “open market operations” and influencing the interest rate that banks charge each other to maintain their mandatory reserves.

The Federal Reserve has been conducting open market operations since the beginning of the pandemic in 2020 by purchasing trillions of dollars worth of government bonds and mortgage-backed securities and an additional 120B in purchases every month to provide liquidity (cash) to the economy and the banks so the banks can increase investments and loans to supercharge the economy. They also dropped the federal funds rate to near 0 making access to money extremely cheap for homebuyers, businesses, etc. The FED made their intentions explicitly clear by focusing on the unemployment numbers and basically kicking the inflation can down the road so to speak. With such drastic measures, inflation was inevitable even though there seemed to be denial about the issue from many sources including the FED itself.

Now the Federal Reserve finds itself in a difficult position of having to deal with severe inflation, the highest recorded CPI (Consumer Price Index) numbers since 1982, supply chain issues that will persist, and a labor force that has not recovered despite the narrative you hear about 4.2% unemployment.

The Federal Reserve now has to deal with 6.8% consumer inflation in an economy by grinding their asset purchases to a halt on a much tighter time frame than originally planned and look to raise interest rates that have typically brought an end to bull markets built on cheap money as we saw in 2002 during the dot com bubble. Rising interest rates are a problem for the federal government as well because the cost to service our ever-increasing debt will become our single largest expenditure if the federal funds rate increases to just a measly 3.5%. Take a second to watch a full explanation by Heresy Financial where he does an excellent job explaining, but it’s not for the faint of heart.

To end, the tools the Federal Reserve typically uses to combat inflation aren't as readily available as they have been in the past. If they raise interest rates to 2% which is an 8x increase from current levels, this will have negative effects across most asset classes including stocks, while doing little to combat inflation. At the same time, it’s widely understood that if rising interest rates cause a sharp drop in the stock market, the FED will swiftly reverse course and continue to buy bonds and drop interest rates to near zero once again. We believe the way to combat this is to prepare for volatility but stay steadfast in your strategy, continue to accumulate assets that will benefit from inflation, and be ready to capitalize on buying opportunities on profitable companies with a long track record of producing earnings.

If you are unsure how we are doing this for you in your strategy please give us a call so we can discuss.

Nate gives his case why now could be a nice time to purchase Amazon for long-term investment and a few others as well. You can listen to it here.

This newsletter is for informational purposes and should not be taken as direct investment advice without consultation.  Investing involves risk including the potential loss of principal.  Understand all risks and fees before investing. Crosby Advisory Group, LLC is a registered investment advisor in Ohio and Florida.  Employees of Crosby Advisory may own investments mentioned in this newsletter.  Insurance products are sold and serviced through Crosby NMD Insurance.