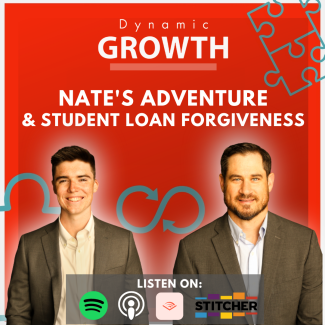 One step at a time

We’ve been talking a lot lately about the importance of patience and self-control when it comes to approaching most scenarios in life. This week we add one more piece of advice, whether you are climbing a mountain or watching the stock market, take everything one step at a time. Oh, and if you ever climb a mountain, do yourself a favor and train for it. Easier said than done.

What’s been going on in the world

The market had a good August – which is even better given that August is normally not a great month for the stock market. The market performance is a bit surprising given the inflation numbers – it feels like there is still a lot of optimism. Bonds also have surprised us as they continue to sell off despite no real change from the Fed.

Nvidia (technology provider) is a company we talked about years ago on our podcast as we were excited about the long-term prospects of their product, investments, and leadership. What we didn’t know is that the US government was going to step in and limit sales to China. You can research a lot about a stock but predicting the 10-11% fall of Nvidia stock is one that would have been tough to foresee.

Geopolitical events continue to play a huge role in the economy. The snowball effect from COVID has taken us through a semiconductor shortage and major price increases. The ship that was stuck in the Suez Canal blocked hundreds of other ships and cost the global economy billions of dollars. Not to mention the conflicts in Russia, China, and Taiwan have led to decoupling from western economies. These factors are driving risk management teams to look at reshoring initiatives. Those reshoring activities could lead to many manufacturing jobs coming back to the US and an increased demand for skilled laborers (which we don’t have today). The skills required for these jobs will garner higher pay. With laborer demand increasing, what does that look like for college and university enrollment? Did we just talk ourselves back to the debt forgiveness topic?! It’s all connected.

Please note: This content is not a direct recommendation for investment. Investing involves risk including the potential loss of principal. Not all investments are suitable for all people. Crosby Advisory Group, LLC is a registered investment advisor in Ohio, Florida, and Texas.