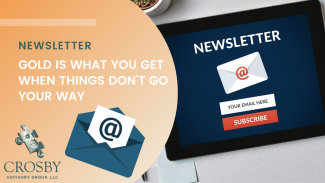 Gold is what you get when things don't go your way

“Experience is what you get when you didn’t get what you wanted.”

I love this quote. When I read it, I immediately texted it to my father-in-law with no explanation. He is one of the few people in my life that I can talk to about investing all day long and he doesn’t get bored or look for a more interesting task (like scraping paint) to escape the conversation.

If you hire a pro to do a job for you, what you are essentially paying for is avoidance of major mistakes. Any expert in their field got there by climbing a mountain of mistakes. They take each mistake made, learn from it, and use it as a step to take them to the next level of expertise. Every Monday we have a company meeting with all employees, and in a recent meeting I made a suggestion regarding our marketing and Carly Snyder spoke up an gave me a few reasons why my idea was not well thought out. That’s why she runs CAG Marketing; she has seen that mistake made before and she’s on our team, so we don’t make it.

We study the great individuals in our chosen fields because hopefully that can fast-track our expertise. Although there are great benefits from attending the school of hard knocks, studying great mentors can allow us to learn from their mistakes without having to experience them ourselves.

Warren Buffett’s mentor was a gentleman by the name of Ben Graham, who history credits as the founder of value investing. Value investing is a strategy that calls for an investor to buy a company for less than its intrinsic value. To Ben Graham, it didn’t matter what product the company produced, sold or serviced, what mattered is its stock price relative to its intrinsic value. Although Warren considered Ben Graham an invaluable mentor, he saw flaws in Graham’s process. Since Graham only cared that a company’s stock price was below its intrinsic value, and not how or where it derived its income, Graham ended up owning a portion of stocks that never grew or continued to lose value until they were obsolete. This factor reduced the overall return for Graham.

Warren, like Graham, wanted to buy stocks of companies for a great value, but Warren realized two factors that he believed would improve investment return.

Warren was able to take Ben Graham’s famous investment strategy, improve upon it, and make it his own. With a creed of buying companies for fair value who had durable competitive advantages, Warren was able to see economic downturns for what they were: long-term opportunities. In 2008 when the rest of the world was panic selling, he was buying companies with durable advantages because his experience told him with patience, he would prosper.

Even Warren Buffett has had to climb a mountain of mistakes before he obtained the title of World’s Greatest Investor. When mistakes are made, mine them as if they are gold. I write mine down. Writing helps me remember and relive those mistakes without the cost. Howard Marks, who was quoted at the start of this newsletter, would write hundreds of essays on his philosophy so that he could cement his operating mantra in his mind, so that when the rest of the world panicked, he would act as a professional, and not blink.

Non-Qualified Accounts Eventually Need to Pay Their Own Taxes

Our investors have likely heard me compare non-qualified accounts to the quarterback of their financial plan. There are many advantages to non-qualified accounts, especially during accumulation years. 1) We can access them without penalty. 2) They can be a great source of passive income. 3) Money in the account can fund other investments.

However, we must be careful because the dividends and capital gains that occur in a calendar year are taxable. This is often not noticeable when the account value is smaller, but when the account reaches several hundred thousand dollars it becomes more noticeable. A common occurrence is the investor becomes so focused on the growth of the account, that they are willing to pay taxes generated by the account out of pocket. It is possible for an account to grow so large that it negatively impacts the cashflow and lifestyle of the investor. We invest to enhance our lives, not be servants to our accounts. As a result, when an account reaches a level in which the taxes on capital gains and dividends becomes so great that it affects our tax return, we want to shift the burden of paying taxes from the investor to the investment account. Under current tax law an investor can use a process known as tax-loss harvesting to pay taxes and reduce taxation for the following year. Presently an investor can deduct up to $3,000 in investment loss. A non-qualified account should be able to pay for the taxes it generates without negating its ability to grow in value.

To learn more, contact our office or reach out to us at crosbyadvisory.com.

In Case you Missed it

Disclaimer: This newsletter is for informational purposes only and should not be taken as direct investment advice without a consultation.  Investing involves risk including the potential loss of principal.  Carefully consider all risks and fees before investing. This newsletter represents the opinions of Crosby Advisory Group, LLC.