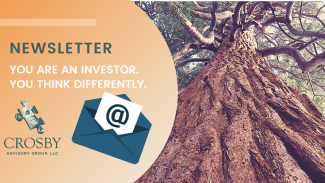 Oh My! Have a fantastically snowy weekend for our clients in northern states!  Our Ashland office was closed Thursday and Friday but thankfully we are able to work efficiently remotely. It was a busy but great week and we have a lot of good information to consume with your evening glass of wine or perhaps morning coffee. Just don't do the morning wine.  Enjoy and thank you for your trust!-Nate

There is a tug of war that is being fought right now between Bulls and Bears.  That’s not breaking news, it has been going on since investment markets were a thing.  A Bull is an investor that believes there is reason for the stock market to go higher.  Conversely, a Bear, although often confused with a hairy investor, is someone who believes the market will lose value.  As an investor, I find it helpful to listen to both cases with an open mind.  In the case of the Bear, we must be careful to know what type of Bear is presenting. There is a species of bearish investor known as a Perma-Bear, which is someone who always believes we are moments away from the bottom falling out, or the sky falling or both. You probably know someone like this at your work or even a friend or family member.  We love them, despite the fact that, let’s face it, they are curmudgeons.  They love to be the bearer of predictions of doom.  Thankfully, Perma-Bears can quickly be discredited by pointing to a historical chart of the U.S. stock market, much like the way you combat a trash-talker in sports by pointing to the scoreboard.  There really isn’t an adequate comeback to winning. Case in point a $10,000 investment the U.S. stock market in 1975 would be worth over $2.4 million today. You can see for yourself at portfoliovisualizer.  Over that time period, an investor would have endured many gut-wrenching moments, including Black Monday, the 1990 Recession, the Dot Com Bubble, the 2008 Financial Crisis, 2011 Bear Market, the August 2015 Market Sell-Off, and the Covid Crash of 2020.  Every time those events happened, Perma-Bears came out of their cave to tell us “I told you so”, only to quietly retreat back into their caves as stocks eventually climbed up and to the right again.

Why are Perma-Bears repeatedly wrong?  It’s because their time horizon is too short.  Mechanics of supply and demand are working against them.  Chances are that global consumers will be consuming more products 10 years from now than they do today.  Additionally, investors don’t invest for the next quarter, and we are not putting money that will pay next month’s mortgage in investments. An investor’s superpower is his or her ability to be patient and calm while Bears make their case.  Let’s look at a recent example.

Since January 1st, the stock market as measured by the S&P 500 is negative for the year.  As we have discussed in numerous newsletters and online presentations, the fear in the stock market today is centered around the unknown number of interest rate increases that are heading our way.  Last week, I stated that it was my opinion that the market was oversold.  There was too much pessimism about interest rates and I felt the stock market was pricing in worst case scenario.  Bear investors were having their day as the market continued to decline.  Then something happened. The United State’s largest company, Apple, reported arguably the best quarter in the history of the company.  Microsoft, the U.S.’s second largest company reported year over year revenue growth of 20% and increased cash on hand by 151%.  Amazon reported after hours on Thursday and showed it increased its earnings per share by a whopping 657%.  Despite these earnings the market opened mostly down Friday morning.  The Jobs Report came out and showed payroll across the United States had jumped significantly.  This is good news, more jobs were created, right? Not if you are Bear.  Bears worried that this showed the economy is resilient to Covid, supply chain constraints, and other economic ghouls and goblins which would give the Federal Reserve more reason to raise interest rates faster and more times in the coming year.  This sent stocks tumbling early this morning only to see the S&P 500 and NASDAQ finish positive in the afternoon.   As we stated in last week’s newsletter, winners tend to win.  In the short term, I expect the tug of war between Bulls and Bears will continue to drive volatility in the markets.  If our investment accounts are tailored to our time horizons, short term volatility is not a threat to our long-term objectives. Especially if the short-term volatility has nothing to do with the actual investments that we own. Letting noisy Bears distract us from our long-term objectives is a threat.   The future tends to reward the brave. I encourage you to remain confident because as long-term investors, history is on our side.

Macy’s segment on health and wealth is back and is one of our most popular weekly posts.  You can watch the most recent health and wealth on exercise in limited space and cryptocurrency here!  Also, if you enjoy the service you get at Crosby Advisory Group, LLC, there is a good chance Macy is behind it.  Macy is often the unsung hero on our team, working behind the scenes in many cases.  She shows up with a smile on her face and works till days’ end with a singular goal of making client experience exceptional.  All of us are better off with her on our team! Thank you Macy.

Derek and Nate continue their discussion on sectors.  In our most recent podcast we took a deep dive into the Communication Sector.  Did you know two companies make up 35% of Vanguard’s Communication Sector (VOX)? This is fascinating sector which has undergone tremendous changes in the past 15 years. Listen to it here and dazzle your friends with information about the communication sector at your next gathering!  You can find old episodes on Spotify, Apple Podcasts or our website.

“Someone’s sitting in the shade today because someone planted a tree a long time ago.”  -Warren Buffett

You are an investor.  You think differently than most people.  One of the best contributions you can give to society is to teach someone younger than you what you have learned. Plant that seed today.

We have been discussing Facebook’s stock since the beginning of the year. If you are looking for value in 2022 you have to look beyond the rock stars of 2020 and 2021, from a valuation standpoint Facebook looked attractive compared to the other FAANG stocks (Facebook/Apple/Amazon/Netflix/Google). We recently did a podcast discussing the Communication Sector of the S&P 500 which Alphabet/Facebook are the core components. Nate and I were both bullish on the sector because we liked Facebook and Alphabet going forward in 2022.

With their lofty visions of the metaverse, it seems they are uniquely positioned to be a dominant player in the space due to networking effects and first-mover advantage in the space with their acquisition of Oculus. A company that has a long history of growth that is looking to devote a lot of resources to a space that has a lot of promise, you would expect that company to be more expensive than it was. It is after all Facebook, a company that everybody loves to hate (me included 😊).

On Feb 2nd, they reported earnings at $3.67 per share when $3.82 was expected (a 4.03% miss) and reported 33.67B dollars in revenue beating expectations by .69%. The stock subsequently dropped 25.39% from $323 per share down to $241 per share. The company lost an astounding $232 Billion in value in a matter of hours. This was a record for the largest single-day loss in value for a company in history. Mark Zuckerberg owns roughly 14% of the company so he watched his personal wealth drop by $32 billion over the same time period.

Why did a measly 4% earnings miss cause such damage? The stock market is forward-looking, meaning a stock doesn't move up or down based on the company today but where the aggregate of investors believe it will be worth. That measly 4% miss was the first time that Facebook was notably hindered by privacy changes on Apple iPhones. During the earnings call, Zuckerberg noted that Apple’s App Tracking Transparency feature will cut Meta’s profits by 10 Billion in 2022.

If you ever thought your iPhone was listening to you, it might be, but more realistically it's extremely good at using past search results and the way you use your phone on certain apps/browsers and gathering information and data about the user. Apps like Facebook will then use that data and direct ads towards individual consumers that are likely to be interested in the products being advertised. Watch “The Social Dilemma” on Netflix

In 2021 Apple announced a feature that will ask users if they want apps to track their data, most people given the option would choose privacy. If the apps/browsers aren’t tracking data then that limits the abilities of companies that use the data to advertise. Targeted ads that Facebook use become much less effective if their data is less precise.

This once again is a brilliant move for Apple. I'm speculating here, but I imagine Apple likely does not care much about user privacy. Apple makes 30% on purchases made in the app store. If an app is free, the app will generate revenue by ads you have probably noticed this on your phones. If targeted ads become less prevalent then app developers can't make money developing a free app that uses ads for revenue, they will have to charge money for the app which Apple then takes their 30% fee.

Companies worth less than $232 Billion: