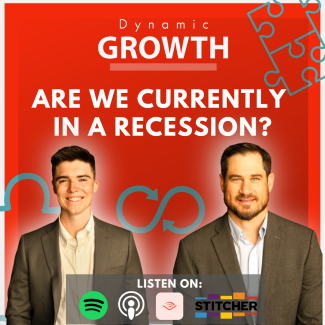 Are we currently in a recession?

Are we currently in a recession?

The question on many people's minds today is whether or not we are currently in a recession. The answer is not a simple one, as the concept of a recession is multi-faceted and can be defined in different ways.

One commonly used definition of a recession is two consecutive quarters of negative economic growth, as measured by the gross domestic product (GDP). By this measure, we are not currently in a recession because the most recent GDP data shows that we are moving at 3.8% seasonally adjusted annualized growth based on January 2023 data.

Another way to define a recession is by the state of the labor market. A recession is often accompanied by rising unemployment and a decline in job creation. In the United States, unemployment has increased in recent months, with weekly jobless claims reaching higher levels. However, there is also some evidence to suggest that the labor market is not as bad as it seems. For example, the most recent Non-Farm Payrolls report showed that the number of jobs added was higher than what was expected by economists.

It's worth noting that certain parts of the economy will be more resilient than others if we do go through a downturn. We are positioning away from high beta/high growth stocks and are positioned for value and defensive stocks. Companies that are highly cyclical and are dependent on discretionary income will be hit the hardest, while companies that make tangible necessities should be less affected.

In conclusion, whether or not we are currently in a recession is a matter of debate, but the evidence suggests that there is a possibility of an economic downturn in the short term. It is important to stay informed, diversified, and tactical to be able to take advantage as they present themselves across different asset classes.

Please note: This content is not a direct recommendation for investment. Investing involves risk including the potential loss of principal. Not all investments are suitable for all people. Crosby Advisory Group, LLC is a registered investment advisor in Ohio, Florida, and Texas.